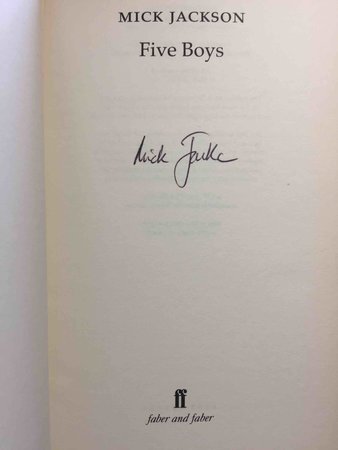 London: Faber & Faber, (2001) dj. SIGNED hardcover first edition - The author's second novel set in wartime Devon - "a close-knit gang of five boys forms a prism that refracts the idiosyncrasies of WWII English life in a small village in Devon. Ostensibly, the story is about Bobby, a newcomer evacuated from London and the Blitz, who is terrorized and then befriended by the gang. But the real protagonist is the town itself and its unusual denizens: Lillian Minter, the spinster who reluctantly takes Bobby in; the Captain, who spends his days fashioning models of ships wrecked off the Devon coast and, eventually, another newcomer, an apiarist known only as 'the Bee King,' who introduces the boys to 'the harem in the hive'." SIGNED by the author on the title page. 239 pp. ISBN: 0-571214010.

Condition: Very near fine in a fine dustjacket. (as new but usual light toning to the pages)