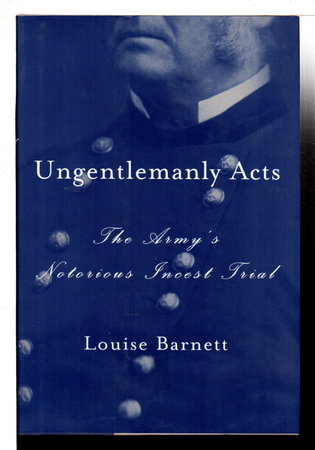 New York: Hill & Wang, (2000) dj. Hardcover first edition - An account of an 1879 Texas courtmartial, in which Captain Andrew Geddes was tried and convicted for accusing a fellow officer of committing incest - "Captain Andrew J. Geddes, whose trial lasted for the extraordinarily long period of three months, an exception was made. Geddes was tried for 'conduct unbecoming,' but in the space where specifications were usually listed in the printed record appeared the phrase 'not fit to be specified.' What abhorrent crime had Geddes committed? What deed so horrifying that the Army's official record could not mention it? In the answer lies the true irony of this case. Geddes had accused a fellow officer, Lieutenant Louis H. Orleman, of an unspeakable offense but instead of investigating Orleman, the Army tried Geddes for speaking of Orleman's alleged crime." Illustrated with photographs, appendices, notes, bibliography, index. 287 pp. ISBN: 0-809073978.