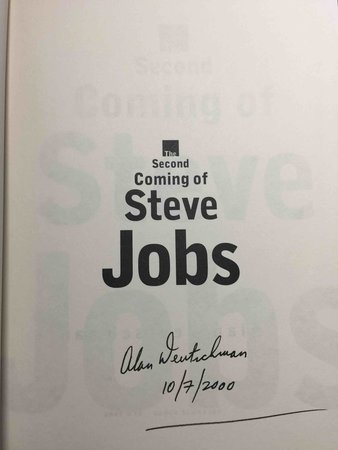 THE SECOND COMING OF STEVE JOBS.

New York: Broadway Books, 2000, dj. SIGNED hardcover first edition - An in-depth portrait of Steve Jobs which draws on scores of interviews with colleagues, rivals, and friends to describe how, after a twelve-year exile from Apple (during which time he founded NeXT and the film animation studio, Pixar), he returned to become the CEO and to turn the company around. SIGNED by the author on the half title page and dated in the year of publication. Index. 321 pages. ISBN: 0-76790432x.

Condition: Fine in a fine dustjacket (a new, unread copy.)