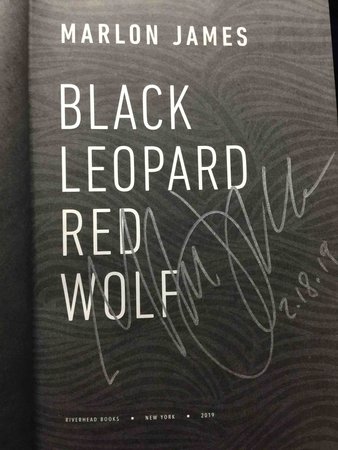 New York: Riverhead Books, (2019). SIGNED hardcover first edition - The first novel in his Dark Star trilogy, a book which draws on African history, mythology and fantasy "to explore what happens when a mercenary is hired to find a missing child. Tracker is known far and wide for his skills as a hunter: 'He has a nose,'people say. Engaged to track down a mysterious boy who disappeared three years earlier, Tracker breaks his own rule of always working alone when he finds himself part of a group that comes together to search for the boy. The band is a hodgepodge, full of unusual characters with secrets of their own, including a shape-shifting man-animal known as Leopard." SIGNED on the title page in silver and dated in February 2019, in the month of publication. James, who was born in Jamaica, won the 2015 Booker Award for his novel "A Brief History of Seven Killings." Map, list of characters. 620 pp. ISBN: 978-0735220171.