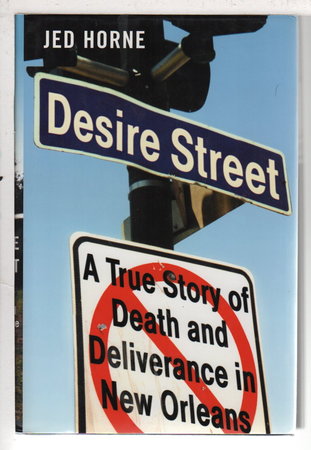 DESIRE STREET: A True Story of Death and Deliverance in New Orleans.

New York: Farrar, Straus & Giroux, (2005). SIGNED hardcover first edition - An account of a New Orleans murder trial and of justice gone wrong. "In a New Orleans supermarket parking lot in the fall of 1984 ,two disparate lives become inextricably bound for the next fourteen years. The first, the life of Delores Dye, a white housewife and grandmother. The second, a young black man with a gun in hand. Moments following their maybe not so chance encounter, Mrs. Dye lay dead on the sunbaked macadam, and the killer had made off with her purse, her groceries, and her car. Four days later, following a tip, authorities arrested a known drug dealer and father of five named Curtis Kyles. Kyles would then be tried for Mrs. Dye's murder an unprecedented five times, though he maintained his innocence throughout each trial. Convicted and sentenced to death in his second trial, he would spend fourteen years on death row. . . But the case slowly yielded a deeper drama: That police and prosecutors may have been complicit in the vengeance that framed Kyles cuts to the heart of a system of justice for Southern blacks in the era since lynch mobs were shamed into obsolescence." INSCRIBED by the author on the title page "for --- esteemed and much loved comrade in arms." Nominated for the Edgar Award. Photographs. 343 pp. ISBN: 0-374138257.