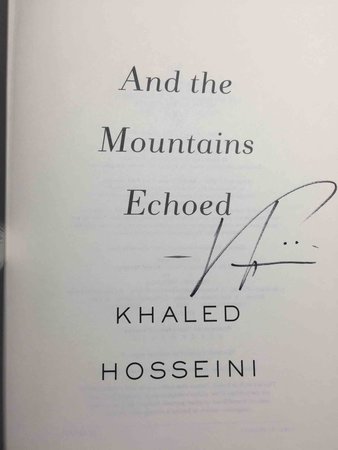 AND THE MOUNTAINS ECHOED.

New York: Riverhead Books, 2013. dj. SIGNED hardcover first edition - Third novel by the author of "The Kite Runner." Beginning in Afghanistan, this novel has been described as "sweeping, heartbreaking, and ultimately uplifting. A day after he tells the tale of the div, the father gives away his own daughter to a wealthy man in Kabul. What follows is a series of stories within the story, told through multiple viewpoints, spanning more than half a century, and shifting across continents. The novel moves through war, separation, birth, death, deceit, and love, illustrating again and again how people's actions, even the seemingly selfless ones, are shrouded in ambiguity." (Chris Schluep) 402 pp. ISBN: 978-1594631764.