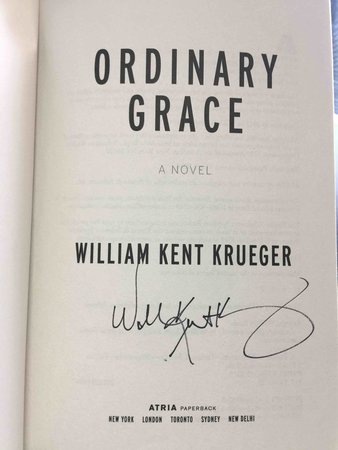 New York: Atria / Simon & Schuster, (2013). SIGNED - Novel which won an extraoardinary slew of awards - the Edgar, the Anthony, the Barry, the Macavity, the Dilys, the Squid, and more. "New Bremen, Minnesota, 1961. . . . It was a time of innocence and hope for a country with a new, young president. But for thirteen-year-old Frank Drum it was a grim summer in which death visited frequently and assumed many forms. Accident. Nature. Suicide. Murder. . . . Told from FrankÕs perspective forty years after that fateful summer, Ordinary Grace is a brilliantly moving account of a boy standing at the door of his young manhood, trying to understand a world that seems to be falling apart around him." SIGNED on title page, 307 pp. plus a reading group guide. ISBN: 978-1451645859.