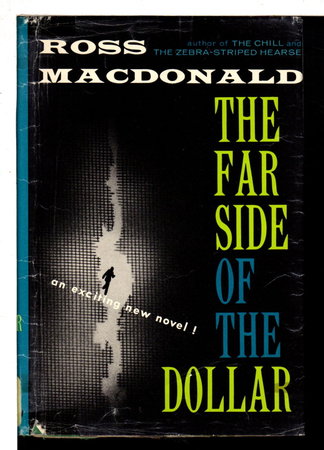 THE FAR SIDE OF THE DOLLAR.

New York: Alfred A. Knopf, 1965. dj. Hardcover - A Lew Archer novel, by this master of the hard-boiled noir detective story. Anthony Boucher commented "I should like to venture the heretical suggestion that Ross Macdonald is a better novelist than either... Dashiell Hammett and Raymond Chandler." In this book, Archer "is hired by the principal of a private reform school to trace a missing boy. What appears to be an ordinary matter of juvenile delinquency is suddenly magnified into a web of murder and extortion." Winner of the Gold Dagger Award, nominated for the Edgar. 247 pp.

Condition: Ex-library with markings, spine slant and significant reading wear, but in a worn dust jacket with a spine label. Overall poor in poor condition, and only listed as an inexpensive alternative.