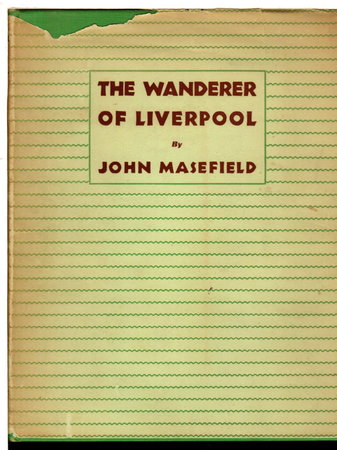 THE WANDERER OF LIVERPOOL.

New York: Macmillan, 1930. dj. Hardcover first edition - The story of the ship which inspired one of Masefield's poems - from her building, her launching in 1891 and fifteen years on the sea, despite her reputation as unlucky ship. A four-master barque she was built to be one of the strongest and most beautiful ships at sea at the time. Includes a selection of Masefield's poems about the sea and ships. Illustrated with a color frontispiece, 38 black and white photographs on glossy stock, 4 plans, including 3 fold-out ones at the rear of the book. ix, 139 pp.

Condition: Very good+ in very good minus dust jacket (tanning to the dj, large chip at top edge of front cover, other edgewear.)