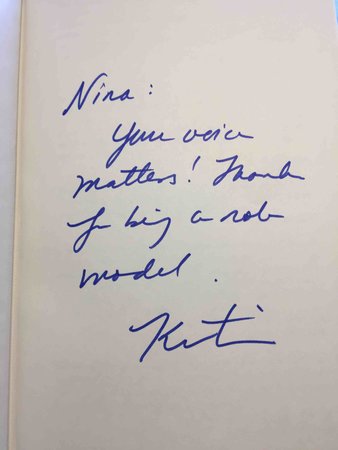 OFF THE SIDELINES: Raise Your Voice, Change the World.

New York: Ballantine, (2014) dj. SIGNED hardcover first edition - Both a personal account of Gillibrand's life and those who influenced her as she progressed from attorney to Congress to the US Senate and a call for women to become more involved. Foreword by Hillary Rodham Clinton. INSCRIBED on the front endpaper by Gillibrand "Your voice matters! Thank you for being a role model." Illustrated with color photographs. List of resources. 194 pp. ISBN: 978-0804179072.

Condition: Very near fine in a near fine dustjacket (short tear to bottom of dj at fold of flap).