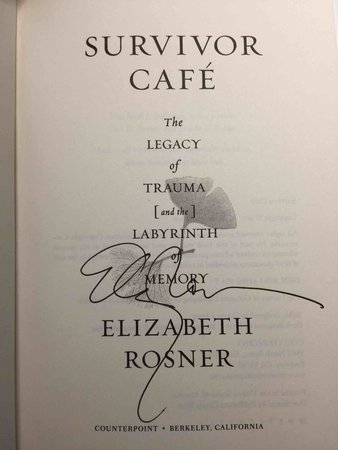 SURVIVOR CAFE: The Legacy of Trauma and the Labyrinth of Memory.

Berkeley, CA: Counterpoint, (2017) dj. SIGNED hardcover first edition - A book which looks at recent history and asks the question "As firsthand survivors of many of the twentieth century's most monumental eventsthe Holocaust, Hiroshima, the Killing Fieldsbegin to pass away, how do we carry those stories forward? [She] organizes her book around three trips with her father to Buchenwald concentration camp - in 1983, in 1995, and in 2015 - and explores the echoes of similar legacies among descendants of African American slaves, descendants of Cambodian survivors of the Killing Fields, descendants of survivors of the bombing of Hiroshima and Nagasaki, and the effects of 9/11 on the general population" Named a Best Book of the Year by The San Francisco Chronicle. SIGNED on the title page. Includes an "alphabet of inadequate language", notes. xvii, 268 pp. ISBN: 978-1619029545.

Condition: Very near fine in a like dustjacket (a new, unread copy, but end of spine slightly bumped)