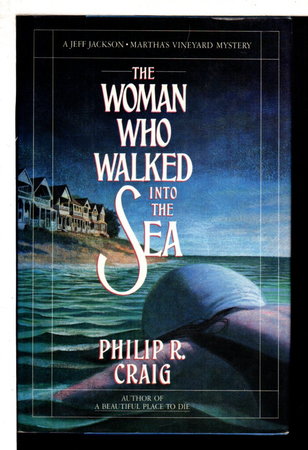 THE WOMAN WHO WALKED INTO THE SEA: A Jeff Jackson / Martha's Vineyard Mystery.

New York: Scribner, (2007.) dj. Hardcover first edition - Craig's third novel and the rather uncommon second mystery in the series featuring J. W. Jackson, former Boston cop, part-time investigator and full-time fishing enthusiast. Great island setting - Although Craig was born in California, grew up in Colorado and traveled extensively, it was on Martha's Vineyard that he found his real home - and started writing this popular series. As Julia Wells stated in his obituary the appeal of these books lies "in their readability, their power of escape and their keen sense of place. The author not only created characters that were agreeable and plots with just enough twist to pique the reader - he always got the Vineyard right." 215 pp. ISBN: 0-684-192284.