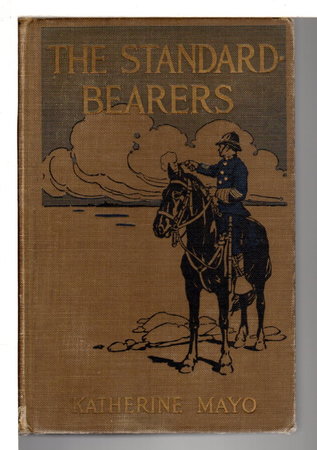 THE STANDARD-BEARERS: True Stories of Heroes of Law and Order.

Boston: Houghton Mifflin, 1918. Hardcover first edition - Uncommon first edition of the author's second book. Illustrations by Captain Louis Keene. Mayo was known as a Nativist and for her xenophobia. In addition to her three books on the Pennsylvania state police, she was influential in the efforts to establish a state police force in New York and "supported their ability to control immigrants and blacks whose involvement in labor rights agitations were viewed by Mayo as a threat to white supremacy." She is best known for her 1927 polemic on India - "Mother India" - a racist and pro-imperialist work which attacked Hindu society and religion, and the culture of India, and one which was used by the British authorities to counter the growing support for an independent India. 324 pp.

Condition: Fair condition only in illustrated brown cloth - some wear and fraying to the ends of the spine and the boards, binding shaken, but still intact.