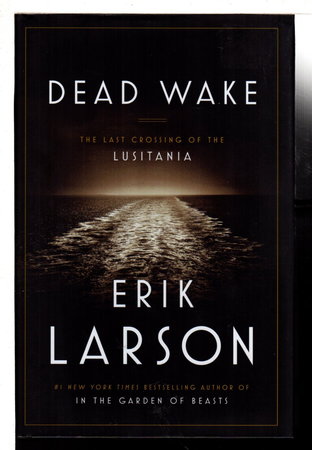 DEAD WAKE: The Last Crossing of the Lusitania.

New York: Crown, (2015) dj. Hardcover first edition - On May 1st, 1915 the Lusitania set sail on its final voyage, sunk by a German U-boat off the coast of Ireland. In addition to the account of its sinking, this focuses on the politics of World War I, on the rise of the importance of Germany's submarines, and on some of the passengers - including the famed Boston bookseller Charles Lauriat and pioneering female architect Theodate Pope - on the Captain, William Thomas Turner, and on the total unpreparedness for the attack, despite a warning from the Germans as the ship left New York. Notes, bibliography, index. 430 pp. Map endpapers. ISBN: 978-0307408860.