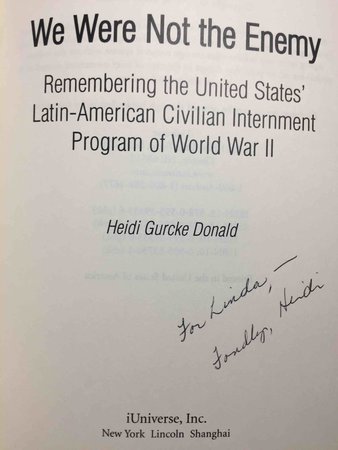 WE WERE NOT THE ENEMY: Remembering the United States Latin-American Civilian Internment Program of World War II.

iUniverse, (2007). SIGNED - "During World War II, the United States used tactics remarkably similar to those in use today against presumed terrorists. By 1939, President Franklin Roosevelt had covertly authorized J. Edgar Hoover's Secret Intelligence Service to begin surveillance of Axis nationals in Latin America. Believing that all German nationals without exception [are] dangerous, the United States surreptitiously pressured Latin-American countries to arrest and deport more than four thousand civilians of German ethnicity to the United States. There, many languished in internment camps, while others were shipped to war-torn Germany. As my parents, German-born Werner Gurcke and his American wife, Starr, began their lives together in Costa Rica, he was falsely labeled one of the country's most dangerous enemy aliens. Soon she, too, was considered dangerous to the . safety of the United Nations. From newlyweds to parents, innocent civilians to dangerous enemies, prisoners to internees, We Were Not the Enemy tells their story. INSCRIBED by the author on the title page. "Endnotes, selected bibliography. xx, 140 pp. ISBN: 978-0595393336.