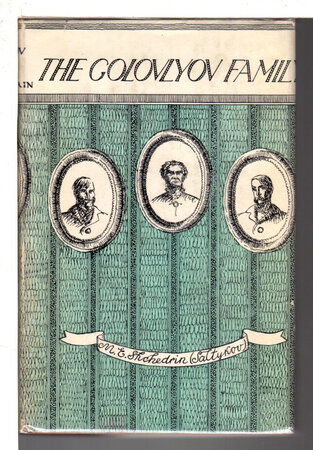 New York: Macmillan, 1931. dj. Hardcover first edition - The best known novel by this writer who is considered the most prominent satirist in Russian literature. Introduction by Edward Garnett who comments that "The last of the great Russian novels that has been awaiting translation into English is by a writer whose name is scarcely known to our public - Shchedrin became a governing official under Alexander II, and his wide knowledge of provincial types in all classes was the basis for his scores of works satirizing Russian society of the period 1856-1882. . . . In THE GOLOVLYOV FAMILY, however, it is not the satirist but the pure artist whom we see triumphing by the incisive handling of his material. The subject, the rise and swift extinction of a family of provincial landowners, grasping, self-regarding human animals, is an unlovely one, but we follow the exposition with absorbed interest.". Translated from the Russian by Natalie Duddington. 336 pp.

Condition: Fine in a very near fine dust jacket. Uncommon in dust jacket and especially so in this condition.