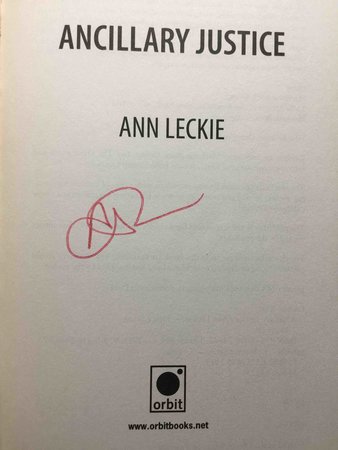 New York: Orbit / Hachette, (2013). SIGNED - Leckie's first novel and the first book in her award-winning trilogy - and the only novel ever to win the Hugo, Nebula ,Locus and Arthur C. Clarke Awards. "On a remote, icy planet, the soldier known as Breq is drawing closer to completing her quest. Once, she was the Justice of Toren - a colossal starship with an artificial intelligence linking thousands of soldiers in the service of the Radch, the empire that conquered the galaxy. Now, an act of treachery has ripped it all away, leaving her with one fragile human body, unanswered questions, and a burning desire for vengeance." SIGNED on the title page. 386 pp plus "extras" - an interview with Leckie and an excerpt from 'War Dogs' by Greg Bear. ISBN: 978-0316246620.