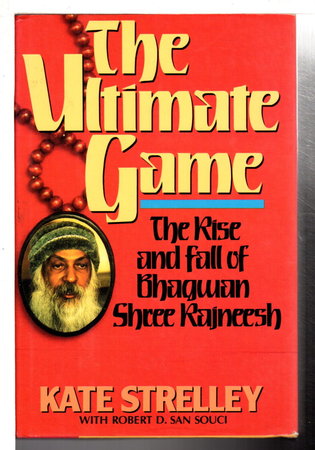 THE ULTIMATE GAME: The Rise and Fall of Bhagwan Shree Rajneesh,

New York: Harper & Row, (1987) dj. Hardcover first edition - An insider's account of the Rajneesh movement - the author was the "secretary" to Ma Anand Sheela for most of 1976-1981, and thus she was part of the inner circle controlling the ashram and its financial affairs, This book attempts but does not quite manage to explain the allure of the movement, and, since Strelley was only on the periphery after the move to Oregon, it does not really explain the collapse either. Strelley's final conclusion is that Bhagwan was the center of it all. An interesting look at a phenomena that was very much a part of the times - late 1960s thru early 1980s - but one which still continues to have an influence today from a different perspective than the award-winning documentary "Wild, Wild Country." Review copy with publisher's material laid in. 381 pp. ISBN: 0-062508210.

Condition: Near fine in a fine dustjacket (bottom edge of textblock slightly bumped).