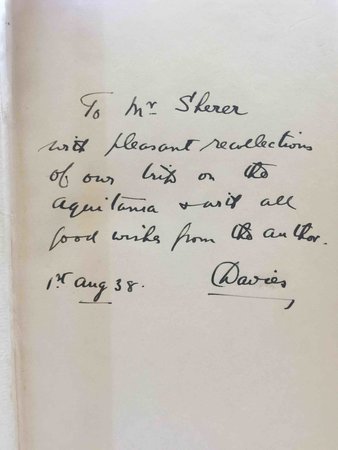 LETTERS TO JOHN BULL AND OTHERS.

London: Williams & Norgate, 1931. dj. SIGNED hardcover first edition - A work published pseudonymously by David Davies, a Welsh liberal politician and philanthropist, and strong supporter of the League of Nations, written after the Great War had devastated Europe and at a time when there was already a sense that more trouble was brewing. "Short, terse, witty, and to the point, this little volume throws a vivid light upon many post-war international problems and points the way to Disarmament and World Peace." INSCRIBED on the front endpaper "To Mr Sherer, with pleasant recollections of our trip on the Aquitania and with all fond wishes from the author, Davies" and dated in 1938. (Mr Sherer is presumably Albert W. Sherer of Chicago, (1884-1973) who worked in advertising and publishing, served on the Board of Trustees of the University of Chicago.) Illustrations by Mendoza. 139 pp.

Condition: Near fine in near fine dust jacket (toning to the pages, offsetting to the endpapers).