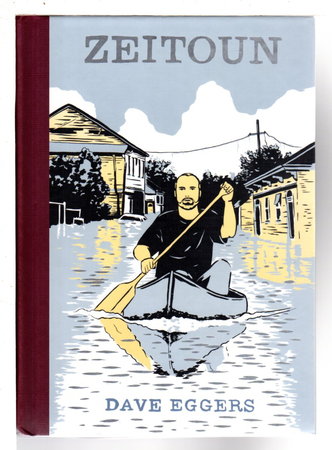 San Francisco: McSweeney's (2009). Hardcover first edition - The story of one man's experiences after Hurricane Katrina. Abdulrahman Zeitoun, a successful Syrian-born painting contractor, decides to stay in New Orleans and protect his property while his wife (born in Louisiana and a convert to Islam) and children leave for safety. After the levees break, he uses a small canoe to assist other stranded residents, before being arrested at one of his rental properties along with three other men by an armed squad. They were swept into a vortex of bureaucratic brutality and imprisoned as suspected terrorists; for a long time all his family knew was that he had "disappeared." Highly praised at the time of its publication, this received the American Book Award. A few years later, his wife filed for divorce and he was arrested and indicted not only for extremely violent abuse but for allegedly conspiring to have his ex-wife murdered. He was acquitted of the murder-related charges which came from a "non-credible" source, but convicted of abuse, and for some this cast doubt on the entire story - although itis undeniable that the government's response to Katrina was not only inadequate but focused more on protecting property than on saving lives. At the end of the book, Eggers portrays them as broken but hopeful - unfortunately, they were not only broken but destroyed. 347 pp plus ads. ISBN: 978-1934781630.

Condition: Fine in illustrated boards. Band wrapped around back cover.