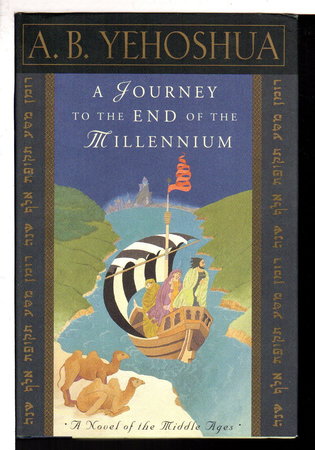 A JOURNEY TO THE END OF THE MILLENNIUM.

New York: Doubleday, (1999) dj. Hardcover first edition - "A Novel of the Middle Ages" Set in 999, this is the story of Ben Attar, a Jewish merchant. "Accompanied by a rabbi, both his wives, and Abu Lutfi, [he] sails to Paris, where he hopes to persuade his nephew's wife that his marriage to two women is both legally and morally permissible. Yehoshua's tale is more than just a travelog through the Europe of the 10th century; it is also a meditation on religion, law, and the differences between the European Sephardic tradition and that of the Middle Eastern Ashkenazic Jews--differences that echo the current social and ideological conflicts within Israel today." Translated from the Hebrew by Nicholas De Lange. 309 pp. Map endpapers. ISBN: 0-385488823.