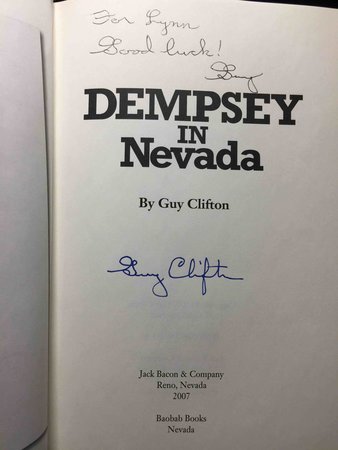 Reno, NV: Jack Bacon & Company / Baobab Books, 2007. SIGNED hardcover first edition - "Jack Dempsey's first trip to Nevada came as he clung to the underbelly of a train, a dangerous practice known as riding the rods and utilized by those too poor to purchase a ticket for one of the passenger cars. In later years, Dempsey, the heavyweight boxing champion from 1919 to 1926, returned to a hero's welcome. . . Dempsey made $717,000 for his first fight with Gene Tunney. He lost his fortune in the stock market crash of 1929 and set about reclaiming it with Reno as his base in the early 1930s, first as a fight promoter and then, once again, as a fighter as he set out to reclaim the heavyweight championship." SIGNED and INSCRIBED by Clifton on the title page. Foreword by Steve Sneddin. Map frontispiece. Illustrated with photographs throughout and 48 inserted pages of photographs on glossy paper. One of only 1500 copies in the first edition. xiii, 182 pp. ISBN: 0-930083334.