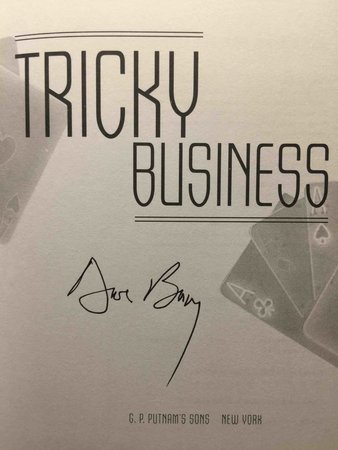 New York: Putnam, (2002.) dj. SIGNED hardcover first edition - The second novel by this Pulitzer prize winning journalist and member of the Rock Bottom Remainders, a satire on just about everything in Florida. A hint of the plot as described on the dj flap: 'The 'Extravaganza of the Seas' is a five-thousand-ton cash cow, a top-heavy tub whose sole function is to carry gamblers three miles from the Florida coast, take their money, then bring them back so they can find more money. In the middle of a tropical storm one night, these characters are among the passengers it carries: Fay Benton, a single mom and cocktail waitress desperate for something to go right for once; Johnny and the Contusions, a ship's band with so little talent they are . . . well, the ship's band; Arnold and Phil, two refugees from the Beaux Arts Senior Center; Lou Tarant, a wide, bald man who has killed nine people, though none recently; and an assortment of uglies whose job it is to facilitate the ship's true business, which is money-laundering or drug-smuggling or . . . something.' SIGNED on the title page. 320 pp. ISBN: 0-399-149244.