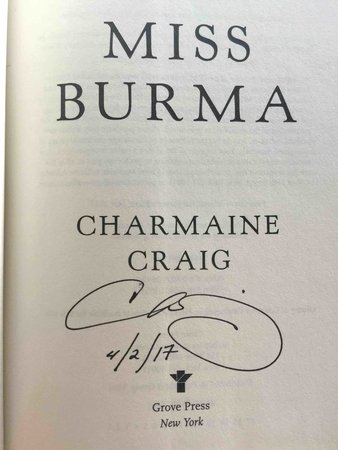 New York: Grove Press, (2017). SIGNED hardcover first edition - The author's second novel, based of the lives of her mother and grandparents, this tells the story of modern-day Burma through the eyes of one family struggling to find justice and meaning during a time of war and political repression. In 1939, Benny a young Jewish officer working for the British, marries Khin, who belongs to Burmas Karen ethnic minority group, which for centuries has been persecuted by the Burman majority. After the end of the war, the British Empire strikes an independence deal with the Burman Nationalists, leaving the Karen and other ethnic minority groups in a precarious position. Soon Benny will become an architect of the Karen revolution, which sparks a long running civil war. Nearly a decade into that civil war, Khin and Benny's daughter Louisa becomes Burmas first national beauty queen. As she navigates her fame and the increasingly dire political reality, she is forced to reckon with her familys past, the Wests ongoing covert dealings in Burma, and her own loyalty to the cause of the Karen people. SIGNED on the title page and dated in April 2017, that is a month before the official publication date. Longlisted for the National Book Award. 355 pp. ISBN: 978-0802126450.