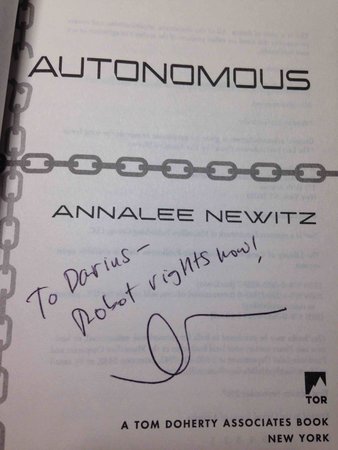 New York: TOR / Tom Doherty Associates, (2017) dj. SIGNED hardcover first edition - The author's first novel, set on earth in 2144, which has been praised by an impressive group of writers - William Gibson, Cory Doctorow, Robin Sloan and more. Neal Stephenson stated "Autonomous is to biotech and AI what Neuromancer was to the Internet." and Charles Yu called this book "a cyborg. Partly, it's a novel of ideas, about property, the very concept of it, and how our laws and systems about property shape class structure and society, as well as notions of identity, the self, bodies, autonomy at the most fundamental levels, all woven seamlessly into a dense mesh of impressive complexity. Don't let that fool you though. Because wrapped around that is the most badass exoskeleton--a thrilling and sexy story about pirates and their adventures." INSCRIBED on the title page "For --- Robots' rights now!" 301 pp. ISBN: 978-0765392077.