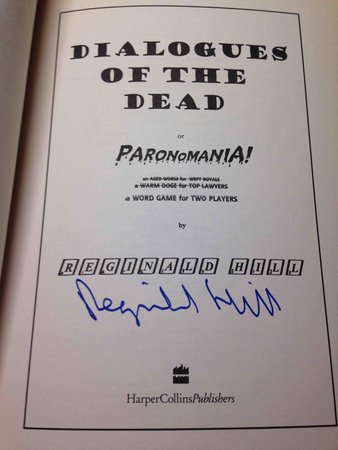 DIALOGUES OF THE DEAD or Paronomania.

London: Harper Collins, (2001). SIGNED hardcover first edition - "The New Dalziel and Pascoe Novel - A man drowns and another dies in a motorbike crash. Two accidents, yet in a pair of so called dialogues sent to the Mid-Yorkshire Gazette, apparently as entries in a short story competition, someone seems to be claiming responsibility for the deaths. But when the story is leaked and a third indisputable murder takes place. Dalziel and Pascoe find themselves playing a game with no rules against an opponent known only as the Wordman." SIGNED on the title page. 454 pp. ISBN: 0-002258463.