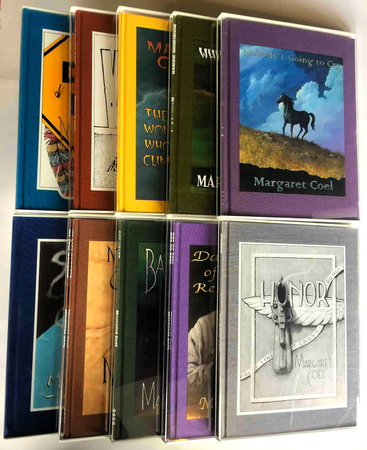 Mission Viejo, CA: A.S.A.P.. (1997-2007). SIGNED hardcover first edition - The complete set of ten books on the Arapaho commandments, each with an introduction by well-known writers, including Tony Hillerman, C, J, Box, James D. Doss, Marcia Muller, T; Jefferson Parker, Jan Burke, Craig Johnson, Nancy Pickard, and Edward D. Hoch. The introduction to the last book - 'Whirlwind Woman' - was written by Coel herself and she describes how she came to write these stories (they were not written in order). Each commandment is hand-written in the Arapaho language by Margaret Coel and each volume is illustrated with two tipped-in illustrations by Parks, a tipped-in photo of Coel, and a pasted on illustration on the front cover by Parks. Each is one of a limited edition of 26 lettered collector's copies SIGNED on the limitation page by author Margaret Coel, the novelist who wrote the introduction, and illustrator Phil Parks. Coel is known for her commitment to accuracy in her depiction of the history and the customes of the Arapaho people (she has Arapaho friends read her manuscripts first) and these stories have been described as "little gems. Approx 20 pp each. ISBN: 1-892011190.