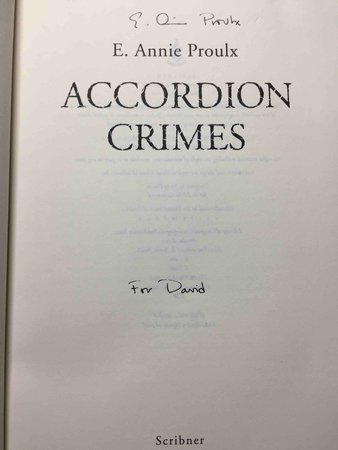 New York: Scribner, (1996) dj. SIGNED hardcover first edition - A novel which "traces the long odyssey of a button accordion, an instrument made by a Sicilian who immigrates to New Orleans in 1891. Imprisoned in a round-up of Italian suspects after the political murder of the chief of police, the accordion maker is lynched, and his accordion falls into the hands of Apollo, a black steamboat screwman. The instrument begins its long, erratic voyage through 20th-century America, passing through the hands of the descendants of slaves, immigrants and their children." INSCRIBED on the title page. 381 pp. ISBN: 0-684195488.

Condition: Very near fine in a like dustjacket (small abraded spot on front endpaper)