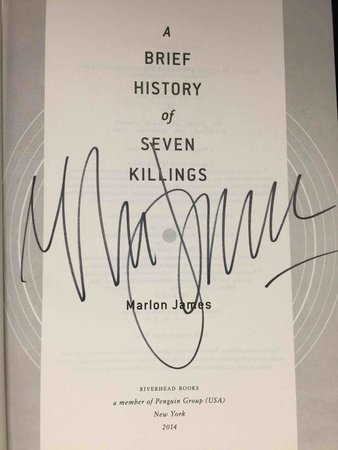 A BRIEF HISTORY OF SEVEN KILLINGS.

New York: Riverhead Books, 2014. dj. SIGNED hardcover - Jamaican-born author's third book, second novel, winner of the 2015 Man Booker prize. "On December 3, 1976, just before the Jamaican general election and two days before Bob Marley was to play the Smile Jamaica Concert, gunmen stormed his house, machine guns blazing. The attack nearly killed the Reggae superstar, his wife, and his manager, and injured several others. Marley would go on to perform at the free concert on December 5, but he left the country the next day, not to return for two years. Deftly spanning decades and continents and peopled with a wide range of characters, assassins, journalists, drug dealers, and even ghosts, A Brief History of Seven Killings, is the fictional exploration of that dangerous and unstable time and its bloody aftermath, from the streets and slums of Kingston in the 1970s, to the crack wars in 1980s New York, to a radically altered Jamaica in the 1990s." SIGNED on the title page. Includes the cast of characters. 588 pp. ISBN: 9781594486005.

Condition: Near fine in a fine dust jacket (some spotting to the boards.)