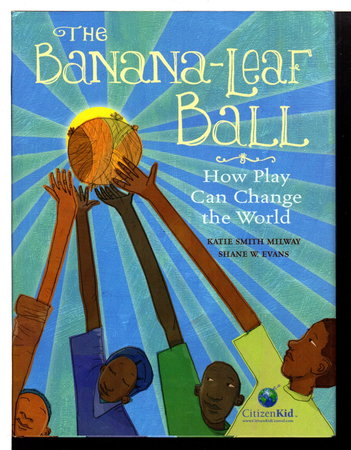 THE BANANA-LEAF BALL: How Play Can Change the World.

Toronto: Kids Can Press, (2017) dj. Hardcover first edition - Based on a true story (which is told at the end of the book), this is an ultimately hopeful book about the resilence of children. "Separated from his family when they were forced to flee their home, a young East African boy named Deo lives alone in the Lukole refugee camp in Tanzania. With scarce resources at the camp, bullies have formed gangs to steal what they can, and a leader named Remy has begun targeting Deo. Then one day a coach gathers all the children to play soccer. Though Deo loves soccer and has even made his own ball out of banana leaves, he's unsure at first about joining in when he sees Remy on the field. But as Deo and the other boys get drawn into the game, everything begins to change. Their shared joy in playing provides the children --- including Remy --- with a sense of belonging." Colorfully illustrated by Shane W. Evans. Includes a list of references. Large format. 32 pp. ISBN: 978-1771383318.