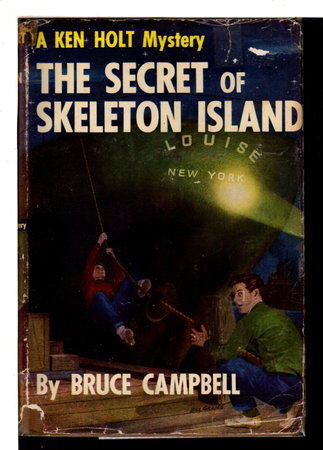 THE SECRET OF SKELETON ISLAND: A Ken Holt Mystery #1.

New York: Grosset & Dunlap, (1949) dj. Hardcover first edition - The first book in this popular series featuring Ken Holt, son of a world-famous foreign correspondent, and his close friend, photographer Sandy Allen. Lists just the first two titles in the book and on the front dust jacket flap (as was typical of series books, both titles were issued at the same time in 1949) Back cover of dj lists to Hardy Boys #28 and rear flap lists to #6 in the Rick Brant series. Frontispiece, dark green scenic endpapers 214 pp.

Condition: Very good in tan boards in a good only dust jacket (gift inscription dated Chrismas 1949, some loss at both ends of the spine of the dj, other edgewear, but this is relatively uncommon in the first edition in dj.)