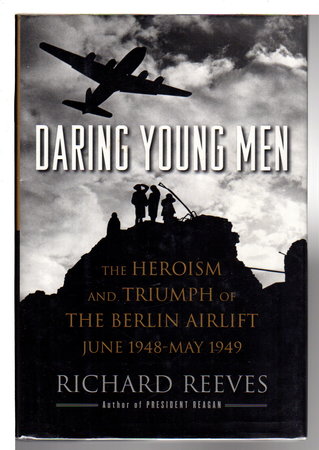 New York: Simon & Schuster, (2010) dj. SIGNED hardcover first edition - An account of a military operation that changed the world. On June 26, 1948, Harry S. Truman began recalling the airmen of World War II to active duty to try to save the people of the western sectors of Berlin. "Stalin had ordered a blockade of the city. . . He was gambling that he could drive out the small detachments of American, British, and French occupation troops, because their only option was to stay and watch Berliners starveor retaliate by starting World War III. . . . [Truman's] answer: 'We stay in Berlin. Period.' That was when the phones started ringing and local police began banging on doors to deliver telegrams to the vets. Drawing on service records and hundreds of interviews in the United States, Germany, and Great Britain, Reeves tells the stories of these civilian airmen. . . [who] did the impossible, living in barns and muddy tents, flying over Soviet-occupied territory day and night." INSCRIBED on the left hand title page "To -- a daring young man." Map, illustrated with contemporary cartoons at the head of each chapter. Notes, bibliography, index. xvii, 316 pp. ISBN: 978-1416541196.