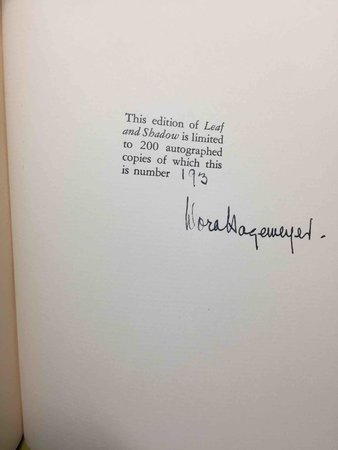 Carmel-by-the-Sea, California: The Carmel Pine Cone Press, (1941) dj. SIGNED hardcover first edition - A slim volume by this poet who was an integral part of the bohemian and avant-garde scene in early 20th century Carmel-by-the-Sea, California, on the Monterey Peninsula. By 1910, Carmel had already gained notoriety as a haven for a bohemian colony of artists, novelists, poets, playwrights, actors, gurus, intelligentsia and radicals. In the early 1920s, the photographer Johan Hagemeyer's brother Hendrik and his wife Dora and their two sons moved to Carmel. Dora, who was educated as a librarian in her native New Zealand, opened the Woodside Library. In 1928-9, she also involved in Pauline Schindler's modernist alternative newspaper "The Carmelite" along with Edward Weston, Carol Aronovici, Edith Dickinson, Lincoln Steffens and his wife Ella Winter and others. This copy is #173 of an edition "limited to 200 autographed copies," each numbered and SIGNED by the author. 53 pp plus colophon.

Condition: Very good in very good minus dust jacket (contents fine, but some discoloration from tape at the top of the dj spine, minor edgewear and short tears).