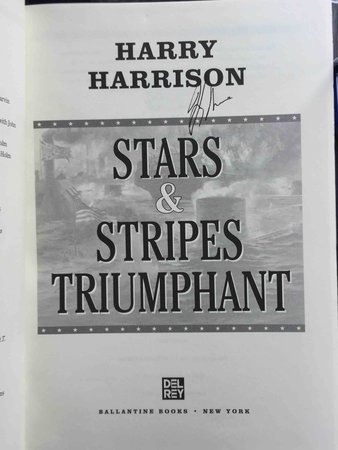 New York: Del Rey / Ballantine, (2003) dj. SIGNED hardcover first edition - The third and final book in his alternative history series based during the Civil War - "at the dawn of the U.S. Civil War, Britain itself committed an act of war by seizing a U.S. packet ship. In retaliation, the Confederate States rejoined the Union and took up arms against England. Repulsing a British invasion, and defeating her majestyÕs army first in Canada, then in Mexico, then in Ireland, American pride and power swelled. . . . Now, Queen VictoriaÕs empire is more dangerous than ever before, turning against the Irish on her own soil, flexing her naval might, and all but forcing a weary President Lincoln to authorize the next step in a headlong journey toward war" SIGNED on the title page. List of characters. 249 pp. ISBN: 0-34540937X.