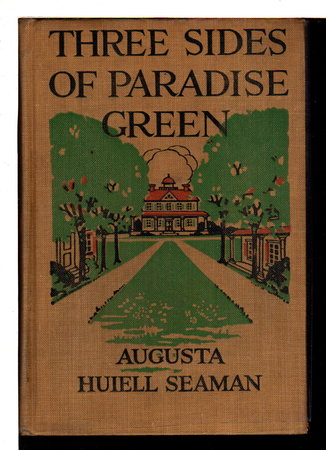 THE THREE SIDES OF PARADISE GREEN.

New York: Century, 1920. Hardcover - One of Seaman's earlier mysteries, and one of her more appealing stories in many ways: it is the only one of her books to be set in Connecticut, in a thinly disguised version of her mother's hometown of Stratford, and is notable for its careful attention to pre-Revolutionary architecture. It is also the first of her mysteries to bring in the theme of the survival of Louis, Dauphin of France. Written in the first person, in lively journal entries by a young Helen Roberta - called Bobs - this is set against the backdrop of the first World War raging in Europe, although the United States is not yet involved. This book was dedicated by Seaman to 'the real Helen Roberta', her daughter, called Bobbie. Illustrated by C. M. Relyea with a frontispiece and 3 glossy plates. 275 pp.

Condition: Very good in tan cloth with black lettering and green, red and black illustration on front cover and spine (bookplate and owner's name on front endpaper dated in 1922 with the comment "Is this a good book? Ask me and I'll say yes")