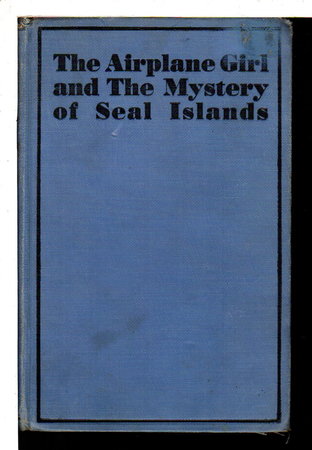 THE AIRPLANE GIRL AND THE MYSTERY OF SEAL ISLANDS, #3 in series.

New York: World Syndicate Publishing Co. (1931.). Hardcover - The third book in the Airplane Girl series (originally published as the Girl Sky Pilot series) . As Brodogan comments in her monograph on "Flying Girls, Super Sleuths." . "In the moment before aviation was commercialized, and social limits were officially imposed, a number of significant girlsÕ aviation series books slipped past cultural gatekeepers and emerged onto the reading scene." This series was one of several in the early 1930s, most quite uncommon now. It is a mix of realism and the improbable - Roberta Langwell finds herself kidnapped and her plane taken over by seal poachers who are operating from an island in the Bering Sea. Unlike most juvenile series, this ends abruptly with Roberta still imprisoned on the island, although her means of escaping seems to be at hand. 223 pp.

Condition: Good only condition in blue cloth (corners bumped, rather severe toning to the pages, slight spine slant and some wear to the covers)