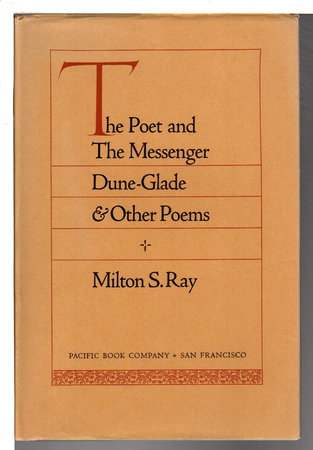 THE POET AND THE MESSENGER, Dune-Glade and Other Poems.

San Francisco: Pacific Book Co., 1946. dj. Hardcover first edition - Foreword By Benjamin Putnam Kurtz, In addition o to the long title poem, inspired by the United Nations Conference and the hopes of ending war (which was published in a separate edition by the Grabhorn Press in 1945), this includes many lyrical poems on California and "an idyll of days long past" on the Farallones Islands. Frontispiece portrait. One of 950 copies printed by Johnck & Seeger. vi, 52 pp plus the colophon.