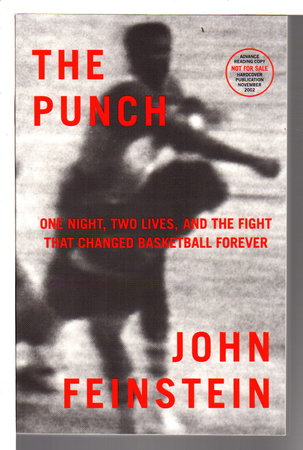 THE PUNCH: One Night, Two Lives, and the Fight That Changed Basketball Forever.

New York & Boston: Little Brown, 2002. First edition - "1977 and an on-court fight breaks out between the Houston Rockets and the LA Lakers. Rudy Tomjanovitch races to break it up and is met by Kermit Washington's fist, delivering one of the worst punches ever seen in sport. Basketball was changed for ever. Tomjanovitch was a Rockets all-star, 6'7" and white. The punch dislodged his skull from his head, leaving him needing years of surgery and therapy. Washington was . . . one of six athletes in the history of the NCAA to be both an academic all-American and a basketball all-American. By all accounts an exemplary man - until the split-second in which he threw his arm forward and devastated his reputation. The fact that Washington is black hasn't helped his treatment in the press or public opinion and no team in the NBA will hire him as a coach. . . the untold story of what went wrong that night, the drastic response by the NBA, the conspiracy theories about the fight's origins and a story of how one man's mistake has haunted two good men for their entire adult lives." 370 pp.