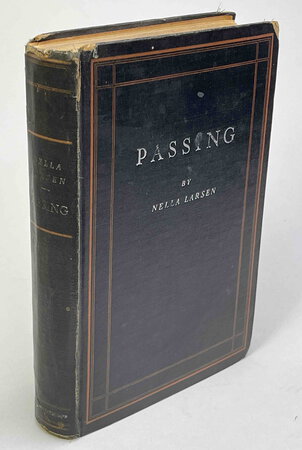 New York: Alfred A. Knopf, 1929. Hardcover first edition - Her second (and final) novel, a story about crossing the color line by one of the most important writers of the Harlem Renaissance. Hard to find in any of the original Knopf printings, and especially so in the first edition. Basis of the highly praised recent film directed by Rebecca Hall. Bound in black cloth with red lines bordering the front cover and silver lettering. 216 pages.

Condition: Fair condition only with significant rubbing to the covers and some fraying to the spine, corners bumped and worn, although the binding is still sturdy and tight. On the front endpaper is the name and address of Anna E. Tanneyhill, a noted activist in the Urban League who was responsible for several significant initiatives as well as, in her retirement, a community leader in preserving Mashpee's history. The address is of St John's Church in Springfield, Massachusetts where Tanneyhill worked for two years after graduating from Simmons College in 1928. St John's Church was originally founded in 1848 as the Free Church, one of the oldest and most active Black churches in New England. In addition, this copy bears the embossed seal of Gertrude T. Cuthbert, who was, among other things, the Chair of Massachusetts Board of Pardons, and a fellow resident with Tanneyhill of Mashpee in his later years. The printed epigraph in this book is a quote from Countee Cullen, but under her address, Tanneyhill has suggested a different epigraph with lines from another poem by Cullen (The Shroud of Color) - "How being dark, and living through the pain / Of it, is courage more than angels have."