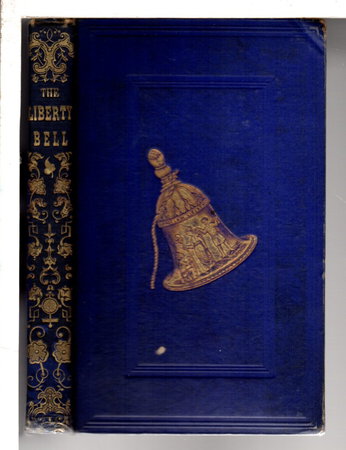 Boston: National Anti-Slavery Bazaar, 1856. SIGNED hardcover first edition - A small book containing prose and poetry about the evils of slavery by many contributors, including Harriet Beecher Stowe, N. Tourgueneff, Wendell Phillips, William Lloyd Garrison, Harriet Martineau, Lydia Maria Child and Maria Weston Chapman. Chapman, along with three of her sisters and several other women, founded the Boston Female Anti-Slavery Society in 1834 and was one of the staunchest supporters of the abolitionist cause, Starting in 1839, 'The Liberty Bell' became one of the items sold at the Anti-Slavery Fair: it was modeled after popular gift books of the time with gilt edges and embossed covers. This volume is notable for the first publication of a long poem "A Curse for a Nation" by Elizabeth Barrett Browning (the second of her poems to appear in the Liberty Bell) and this copy is of special interest because it is INSCRIBED on the front endpaper by the abolitionist and editor of these books, Maria Weston Chapman. The inscription reads "John Harrison, Esq from his friend M W Chapman" and is dated at Weymouth, Massachusetts on Jan 31, 1856. An historically significant book with an uncommon inscription by the woman who was the founder of the Boston Anti-Slavery fair and the guiding spirit behind these publications.

Condition: Very good in the original royal blue cloth covers with gilt lettering and decorations on the spine and a gold illustration of the liberty bell on the front cover; corners bumped, some foxing, notably to the illustrated title page and tissue guard, but the binding is tight and sturdy and most of the pages are quite white and supple. Better than average condition for these relatively fragile books. Maria Weston Chapman's signature is quite scarce; this is only the second inscribed copy which we have handled.