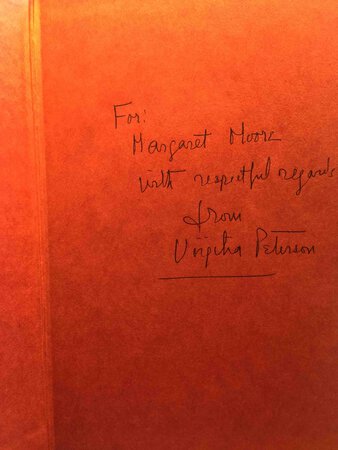 A MATTER OF LIFE AND DEATH.

New York: Atheneum, 1961. dj. SIGNED hardcover - A highly praised and somewhat controversial autobiography - Peterson herself describes it as "an attempt to rise above my limitations" while William Shirer (in one of the many comments on the dust jacket) calls this "an explosively self-revealing portrait" and Kirkus Reviews described it as "not an autobiography in the sense of being a chronology of successive events, but in her search for self-knowledge, she explores the major incidents: her oddly sheltered, prosperous middle-class childhood; . . an illness (polio) in late adolescence, that might well have marred her physically and emotionally; her meeting- parting- and eventual marriage to a Polish prince .. . the war- which left her oddly untouched though it changed the flow of life; motherhood- strangely peripheral; post-war and a new love; the catastrophe that almost wrote finis to her life- and ever and always, her stumbling ineptitude in human relations, growing- she feels- out of that failure in understanding that stemmed back to the mother she hated. There are many gaps in facts- but it seems to matter little in the almost uncomfortably honest search for herself." INSCRIBED on the front endpaper. 334 pp.

Condition: Near fine in a very good dust jacket (price-clipped, some toning to the dj)