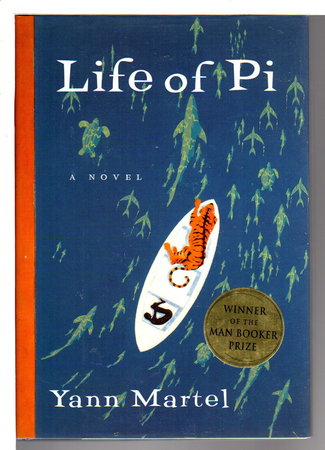 THE LIFE OF PI.

New York: Harcourt, Inc., (2002.) dj. Hardcover - Winner of the 2002 Man Booker Prize. Shortlisted for the Governor General Award and the Commonwealth Writer's Prize. "After the tragic sinking of a cargo ship, only a single lifeboat remains. Its passengers consist of a Bengal tiger with a broken leg, a hyena, a zebra and Pi - a 16 year-old Indian boy." Although this was a surprise winner of the Booker, it became a controversial choice when accusations were published that Martel had stolen his book's premise from a 1981 novella, "Max and the Cats," by the Brazilian writer Moacyr Scliar. In the author's note at the beginning of this book, Martel himself gave credit to Scliar for the 'spark of life.' Nevertheless, despite the similarities of one of the basic premises - a shipwreck survivor in a boat with a wild cat - this is a very different book in spirit and theme than Scliar's novella. Illustrated endpapers. Basis for the film of the same name. 319 pp. ISBN: 0-15-1008116.