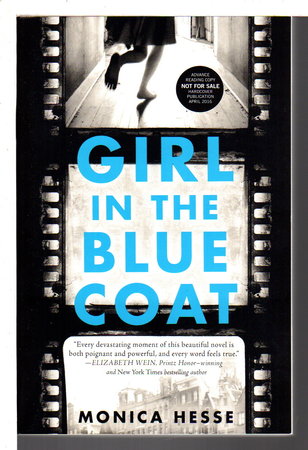 GIRL IN THE BLUE COAT.

New York & Boston: Little Brown, 2016. First edition - The author's first novel, a carefully researched coming of age story for young adults, set against the horrors of war. Set in Amsterdam in 1943 where Hanneke spends her days dealing in black market goods - until an older woman asks her for helf in finding a Jewish teenager she had been hiding, "who has vanished without a trace from a secret room. Hanneke initially wants nothing to do with such dangerous work, but is ultimately drawn into a web of mysteries and stunning revelations that lead her into the heart of the resistance, open her eyes to the horrors of the Nazi war machine, and compel her to take desperate action." 301 pp plus an author's note on the historical accuracy.