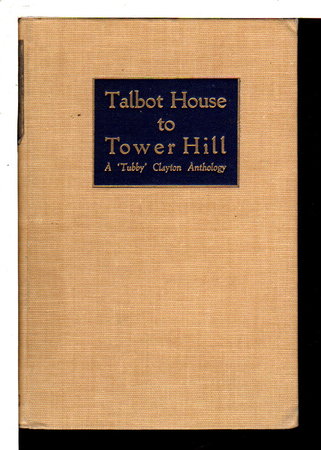 TALBOT HOUSE TO TOWER HILL: An Anthology Of The Writings Of The Reverend P. B. ('Tubby') Clayton, Founder-Padre Of Toc H.

London: Toc H Incorporated, 1956. Hardcover first edition - A selection of both prose and poetry, just a fraction of Clayton's writings. Frontispiece portrait. The history of Toc H is a very interesting one: Talbot House was a rest house in Belgium for the British Troops during World War I - but after the end of the war when Clayton returned to London, the spirit of that house remained with him, and he wanted to create something similar in London. This was named Toc H after the soldier's term for the original house. Over the years this idea grew and the houses became known not only for delivering many services but for providing a place to debate the issues of the day. Tubby was very involved in LEPRA and many Toc H men went to work in the leprosy colonies in Africa. The writings in this book reflect the aims of Toc H - friendship, service, fairmindness, and to witness the Kingdom of God humbly. 163 pp plus a final short poem and an index of quotations.

Condition: Very good in light tan cloth - some rubbing to the label on the spine, bumping to the corners. Uncommon.