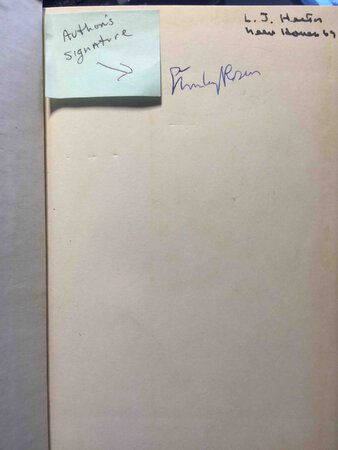 New Haven & London: Yale University Press, 1969. dj. SIGNED hardcover first edition - His second (and probably most influential) book, an attack on contemporary philosophical and political nihilism. The book begins by reflecting on the consequences of the separation of the conception of reason from the conception of good in modern rationalism, which took the value-neutral science of mathematics as its model. It follows from this separation that reason can say nothing about its own goodness, or that the assertion of goodness is necessarily non-rational. However, he argues forcefully for the goodness of reason, and suggests a return to the ideas of Plato. Rosen is noted in his writings as relying as much as possible on non-technical language - this "reflects his conviction that ordinary experience is the basis of the intelligibility of philosophy." SIGNED on the title page. Uncommon in the first edition, and especially so signed. 241 pp.

Condition: Near fine in near fine dust jacket (name on front endpaper, some very light spots of foxing on the last few pages, but overall a very tight and clean copy)