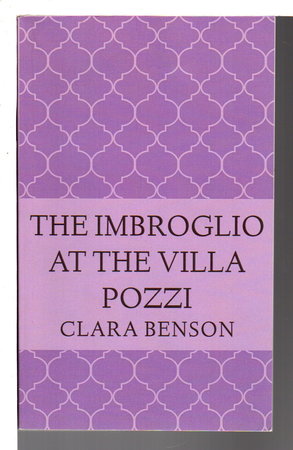 THE IMBROGLIO AT VILLA POZZI.

San Bernadino, CA: By the author, (2014). The sixth in the series of mysteries set in the 1920s and featuring Angela Marchmont. At the beginning of this book is the note "Clara Benson was born in 1890 and as a young woman wrote several novels featuring Angela Marchmont. She was unpublished in her lifetime, preferring to describe her writing as a hobby, and it was not until many years after her death in 1965 that her family rediscovered her work and decided to introduce it to a wider audience." However, the author has now admitted that this was just to make them seem more realistic - as she states "In writing the Angela Marchmont novels, my aim was not to produce a work of historical fiction, but rather to reproduce as faithfully as I could the tone and style of those original Golden Age works," 260 pp. ISBN: 978-1502365927.