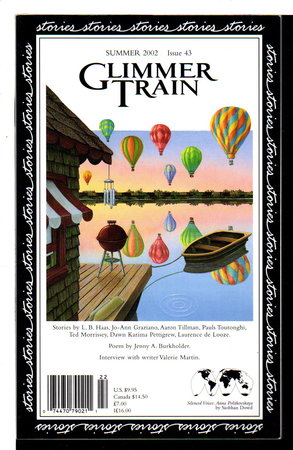 Portland, OR: Glimmer Train Press, 2002. First edition - Includes stories by L. B. Haas, Jo-Ann Graziano. Aaron Tillman, Pauls Toutongi, Ted Morrissey, Dawn Karima Pettigrew, Lawrence de Looze and a poem by Jenny A, Burkholder. Interview with Valerie Martin, and an article in the 'silenced voices' series on the Russian journalist Anna Politkovskaya by Siobhan Dowd. Each story is preceded by a picture of the author as a child, brief autobiographical comments, and a facsimile signature. Several authors in each issue also contribute to the comments and photographs found in the "Last Pages" at the end of each issue. A rather idiosyncratic journal, edited by two sisters, but one which consistently publishes excellent fiction. 192 pp. We specialize in literary journals, and have many others - including many not yet catalogued and listed on line. ISBN: 1880966425.