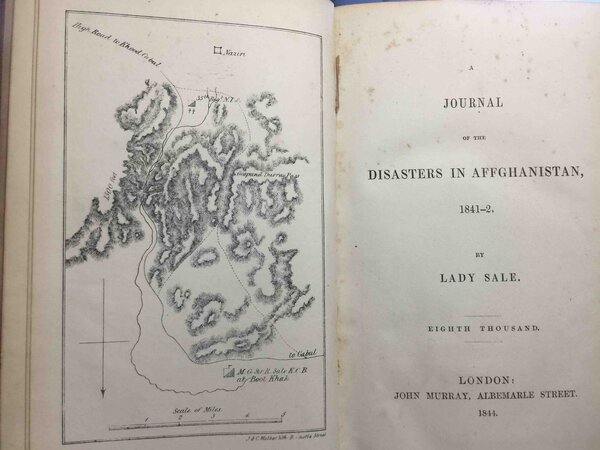 A JOURNAL OF THE DISASTERS IN AFGHANISTAN, 1841-2

London: John Murray, 1844. Hardcover - An account published after Lady Sale's rescue from nine months' captivity in Afghanistan."The first Afghan War of 1838-1842 witnessed one of the greatest defeats ever inflicted upon the British by an Asian enemy--the retreat from Kabul. On January 6, 1842, a British force that, with its followers numbered some 16,000, marched out of Kabul under an illusory safe conduct; one week later, nearly all of them- -men, women, and children--lay dead along the ninety mile route, some killed by the Afghan enemy, the rest frozen to death in the snow. . . One of the few witnesses who survived the massacre, Florentia, Lady Sale, was the wife of second-in-command at Kabul, Sir Robert Sale. Her journal begins in September 1841 when the whole position of the British, and the butterfly social existence they led in the Kabul cantonments, was menaced both by Afghan intrigue and by the incompetence of their own command. The journal ends a year later, with the rescue of Florentia by her husband from nine months of captivity in Afghan hands. In the intervening period she had witnessed battle, murder, and sudden death, had been exposed to freezing cold and burning heat, had endured vermin-infested lodgings and incessant earthquakes--all recorded with a laconic imperturbability and an occasional flash of sardonic humor." Vocabulary of Persian, Hindostan and other oriental words and correspondence relating to Captain Grant. Frontispiece map and a folding map of Kabul, single page map; xxxi, 451 pp.

Condition: Good overall in full leather (approximately one inch missing from the top of the spine.) This copy is of unusual interest since it was from the library of the Earl of Ellenborough, who was the Governor General of India during the time when these events took place, and who was sent to India to "restore peace to Asia" but the whole term of his office was occupied in war. On his arrival there the news that greeted him was that of the massacre of Kabul. Bookplate of Ellenborough on front pastedown, with his hand-written name above it. Stamp citing "Earl of Ellenborough's heirlooms. Book No 12" below it.