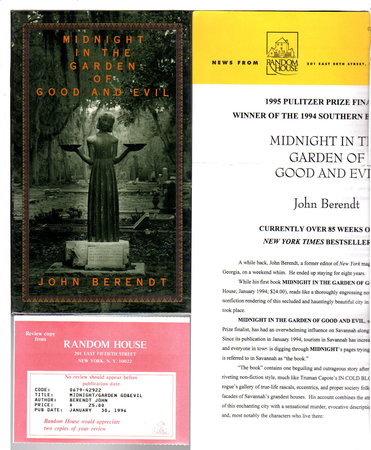 MIDNIGHT IN THE GARDEN OF GOOD AND EVIL: A Savannah Story.

New York: Random House, (1994.) dj. Hardcover first edition - A combination of mystery and travel book, this is an account of a 1981 murder in Savannah, Georgia and its aftermath. Basis for the Clint Eastwood film of the same name. Winner of the Southern Book Award, finalist for the Pulitzer. A true first with the errors on page 11, line 32 (the same error also occurs on p 214, line 18), and page 32, line 1. Publisher's promotional material and review slip for a planned 1995 edition laid in. These materials comment that there were over 700,000 copies in print (and that was before the movie was released) and the reported first printing was only 25,000 copies, a very small printing for a book which became a surprise bestseller but typical for an author's first book. 388 pp. ISBN: 0-679-429220.

Condition: Fine in fine first state dust jacket (original price of $23 on the dust jacket flap and the praise from Ann Beattie at the top of the rear cover )