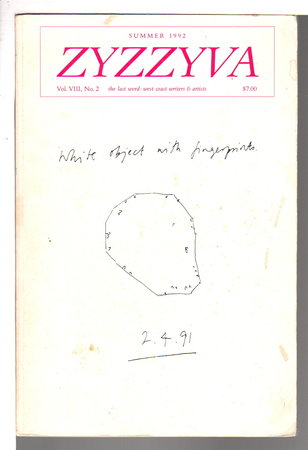 San Francisco: ZYZZYVA, Inc. 1992. SIGNED first edition - A magazine of fiction, poetry, essays and photography. SIGNED by TWO authors at their contributions: Marilyn Chin at her poem "A Portrait of the Self as Nation, 1990-1991' and John Shirley at his story "V, H and You." Other contributors include Peter Coyote, William Vollmann, Dorianne Laux, Kathy Acker and more. Advertisements. 143 pp. We specialize in literary journals, and have many others - including many not yet catalogued and listed on line.

Condition: Very good in glossy illustrated wrappers (some very light foxing and wear to the covers, contents near fine)